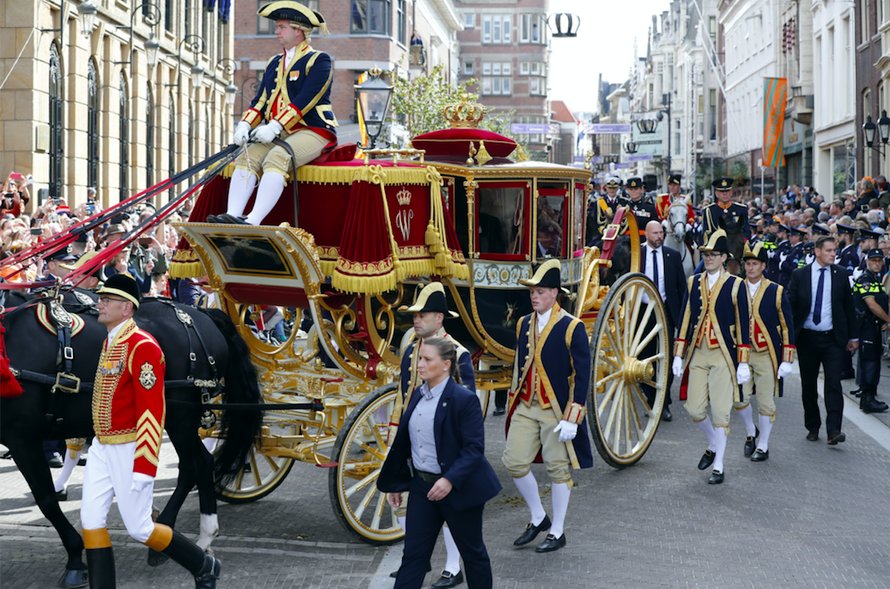 The Amsterdam Museum asks visitors about the future of the Golden Coach. What is your advice for the king? Should the coach continue to be used for ceremonial occasions or not? During the meetings with the sounding board group for the exhibition I pointed out that it is not only the king who decides this, but above all the prime minster. As a lawyer and member of the Republican Society, I would like to make some remarks about who has authority over the coach. There is no question that the Golden Coach is the property of Queen Wilhelmina and her heirs, who since 1968 have entrusted its formal ownership to the Foundation for Crown Property of the House of Orange-Nassau. Yet the foundation does not have the final word. In fact, the capacity to make decisions about the Golden Coach is limited because it is used for the state duties of the king, and the minister who is held accountable is responsible for those activities. Just as the king and any potential successors to the throne are not permitted to marry without the approval of parliament—no matter how outdated this arrangement may be—he cannot freely make decisions regarding the use of this ceremonial vehicle. Since 1848 our Constitution has enshrined the marvelous system of sovereign immunity with the associated ministerial responsibility. For all their official duties, it is not the king or queen who is politically accountable in parliament, but the responsible minister. Everything that falls under the exercise of the functions of the head of state, the membership of the government, and the chairmanship of the Council of State is the political responsibility of the accountable minister, generally the prime minster. In short, the prime minister is the fall guy for the king’s missteps.

Of course the king also has a private life, but ministerial responsibility even extends there. As soon as the public interest is affected, ministerial responsibility comes into play. The media increasingly pushes the boundaries of the private sphere. Public discussions about the king’s actions soon ensue, and the minister has to deal with it. The recent holiday taken by the royal family to their Greek estate during the global pandemic is a good example. Prime Minister Rutte did what he had to do constitutionally and humbly bowed his head in parliament. He admitted that he had misjudged the trip. The king, together with the queen, also expressed regret to the people through gritted teeth. When questioned about the cost of restoring the Golden Coach, the prime minister refused to answer and referred to Article 41 of the Constitution, the right of the king to furnish his house. As the owner of the coach, the king pays for the restoration himself, so Mark Rutte remained silent on this point. The maintenance of the coach is considered a “functional expenditure” pertaining to the king’s official duties, and is therefore paid from public funds by the exchequer.

Ministerial responsibility takes shape during Monday meetings at the palace. This will also have to happen regarding the fate of the Golden Coach. And if the prime minister, perhaps after assessing the mood of the cabinet and parliament, is of the opinion that the public interest requires that the trip to the Binnenhof on Prince’s Day should not be made in the Golden Coach, with its negative colonial associations, the king may share his own feelings, but the prime minister has the final word. He is responsible. My advice to him: put the Golden Coach in the museum; it is high time this is done.