In The Hague, the sun was shining brightly on Thursday 7 February 1901, the temperature was slightly above zero and a strong south-eastern wind was blowing. A beautiful, but somewhat bleak day for Queen Wilhelmina and her fiancé Hendrik van Mecklenburg-Schwerin to get married. The city was lavishly decorated and all preparations were made for an immaculate day. Six days earlier, the Golden Coach had been transported from Amsterdam to The Hague by an extra train in a specially made carriage. It was to carry the bridal couple. On Monday afternoon, 4 February, at 4 pm, a delegation from Amsterdam officially 'handed over' the Golden coach to Queen Wilhelmina at Palace Noordeinde. The delegation consisted of the leaders of the 'Vereniging van het Amsterdamsche Volk' (Association of the Amsterdam people), who presented a book of homage. The delegation, all men, was requested to appear in a black tail coat with a white tie. There was a short speech by the chairman of the honorary committee, Dr. J. Th. de Visser, followed by a word of thanks from Queen Wilhelmina. Remarkable detail: the Spijker brothers were not welcome at the presentation, apparently they had not behaved entirely according to protocol when viewing the Golden Coach in 1898. According to newspaper reports the following day, Wilhelmina gave a heartfelt word of thanks and said that "she herself as well as the Duke have repeatedly inspected the coach and are ever more pleased with the gift, which is so appropriate and very useful for the wedding ceremony". At the farewell, each delegation member received a firm hand from Her Majesty. After almost three years, the mission had finally succeeded. The delegation left the palace and the royal family went to dinner. The following day, a test drive was made in the Golden Coach, especially since there were rumours that the carriage was too high. Fortunately, that turned out not to be the case and all the gates could be passed. Incidentally, the street level around the Buitenhof was raised in 1925, so that the carriage could no longer pass through the Stadhouderspoort on Prinsjesdag. From then on, a different route was taken, but this aside. On the day of the wedding, there was a crowd in front of Noordeinde Palace early in the morning. From there, a double row of soldiers was lined up all the way to the Grote Kerk, where the blessing was to take place. Behind them, the public stood in 'tenfold rows'. The whole route was decorated with more than fifty arches. 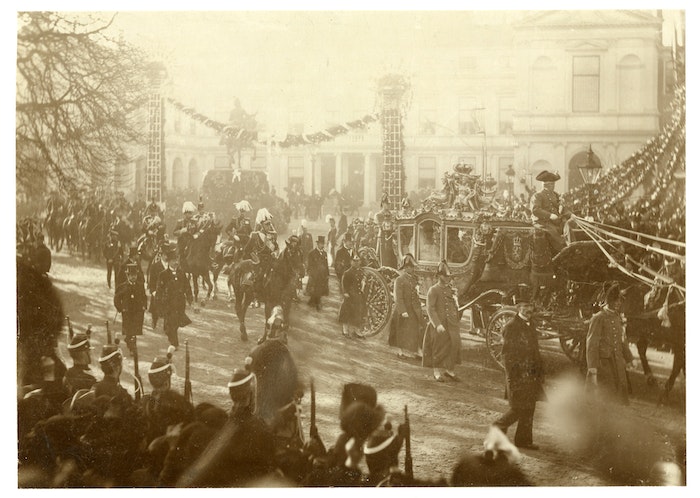 After the civil ceremony in the White Hall of the palace, it was time to leave for the Grote Kerk. This was done in grand style. The procession began with the cavalry as an honorary escort followed by no fewer than nine carriages carrying the royal guests, including in the last carriage the Duke's parents accompanied by the Russian Grand Duke Vladimir Alexandrovitch, son of Tsar Alexander II. The Golden Coach, pulled by eight horses, with the names Carpice, Cabriole, Edelhart, Ferm, Eldorado, Effendi and finally Ceres and Franco, followed. The driving of the coach was in the hands of a father and son, coachman-major Gerard and Johannes Koert. The very experienced Gerard had been employed by the Royal Stables since 1862 and was promoted to coach major in 1880. Son Johannes was a postillion. 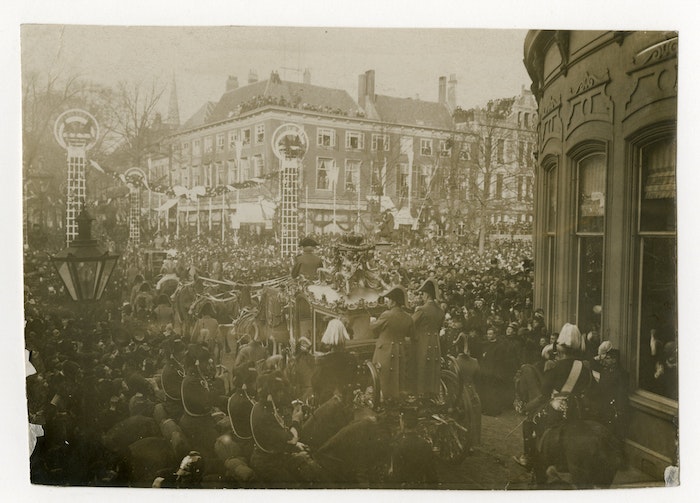 A crowd of people are watching on the Vijverberg, Gemeentearchief Den Haag.

An ecstatic journalist from Het Nieuws van den Dag wrote: 'how beautiful, how fairy-tale like those uniforms and toilets. And finally they got in, the royal couple and the royal mother, and then they went through the rows. Oh, that golden coach, what a splendour'. When they arrived at the Groote Kerk, the church wedding took place. Dame du palais Thora van Loon-Egidius described the wedding ceremony in her diary. She wrote the following about Wilhelmina and her dress: ...I was too much occupied with our dear bride. At first she did not look well, she was too red and with tearful eyes, but later she recovered, and then looked so happy and confident towards her husband, who looked so serious and determined and so good. The Queen's wedding dress was made entirely of silver fabric, which was rich, but I still believe that heavy satin would have made more of an impact, especially the embroidery, which took so much time and work, did not stand out enough, or rather not at all, on the silver, as the embroidery was also in silver and pearl. I would also have liked it if the Queen had had a lace veil or else the tulle more along her face and the tulle much finer and suppler. The large diadem decorated with orange blossom also made the head too heavy. Yet later, at the wedding banquet, I found that our Queen was a very nice and true bride. [Wilhelmina's wedding dress can be admired in the exhibition]. 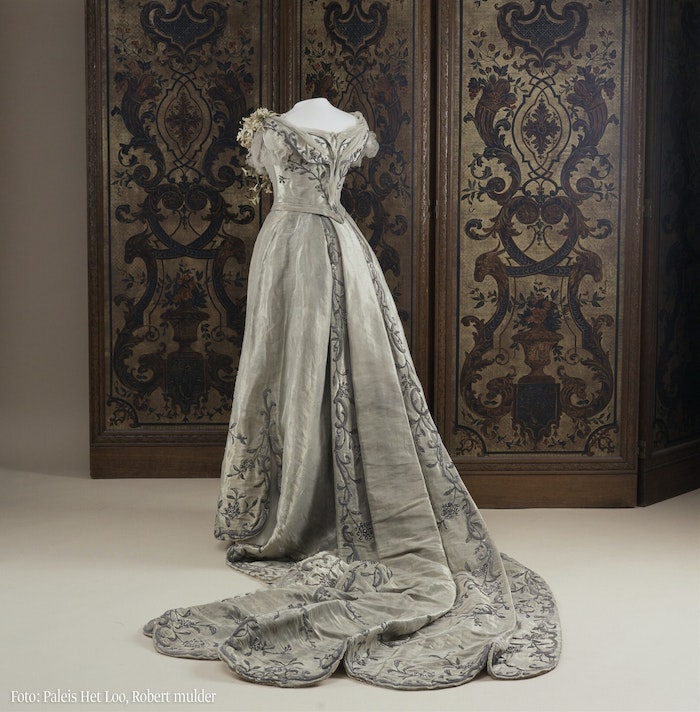 When they said 'I do', the church was deathly quiet. Both pronounced their "yes" in steady voices. The Prince's "yes" sounded loudly through the church. The Queen Mother and the Duke's Mother were visibly moved'. After the ceremony, the same procession of coaches took place, but this time in the direction of the palace. The maiden voyage of the Golden Coach had passed off without incident. To commemorate this day, all the coachmen of the Golden Coach were awarded a medal. From this wedding day onwards, the Golden-Coach, as the most important royal carriage, would be used regularly for inaugurations, funerals, baptisms and of course for the opening of the parliamentary year, Prinsjesdag.