Queen Juliana, accompanied by Prince Bernhard, travelled to the Binnenhof in a Golden Coach on 15 December 1954 to sign the Charter for the Kingdom in the Ridderzaal. This meant a new relationship between the Netherlands, Surinam and the Netherlands Antilles, in which the overseas territories were given an equal place in the Kingdom. The countries in De West, as the Caribbean part of the Kingdom was often called, were to be given full self-determination in terms of their internal affairs, in addition to willingness to provide mutual assistance on an equal footing. 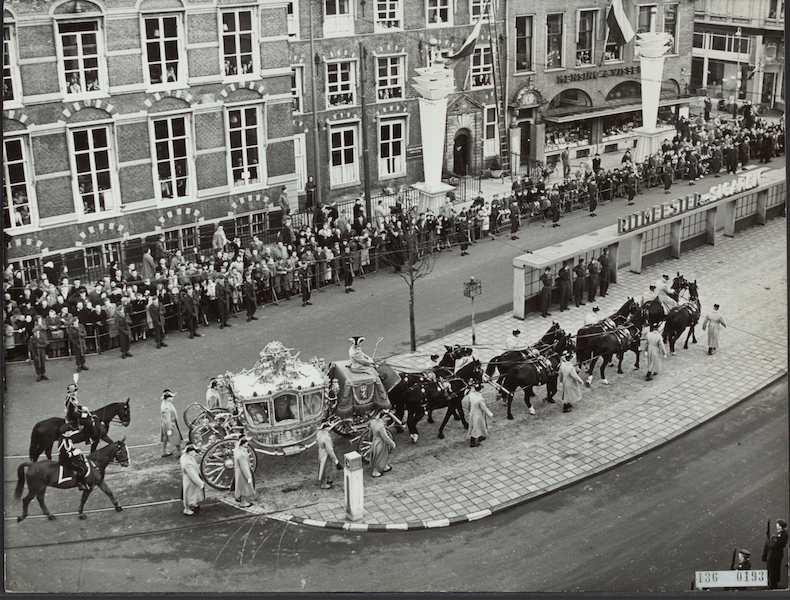 In her speech, Juliana said that the Charter was the result of a development that led to the definitive abolition of colonial relations. No journalist or politician remarked that for this milestone the queen might have done better to use another carriage than the Golden Coach with the panel 'Homage to the Colonies'. Archibald Currie, Prime Minister of Suriname, hoped that the Statute "under the inspiring leadership of the House of Orange, to which the Surinamese people are so attached, will be a victory for the entire population of the Kingdom". Efrain Jonkheer, Prime Minister of the Netherlands Antilles, praised the Dutch love of freedom.

The Polygoon newsreelof that week showed the arrival of the carriage at the Binnenhof, with the commentary voice saying: "the army command had done well to deploy a few Surinamese soldiers who serve in various units of the royal army". With serious faces, they saluted the Queen. 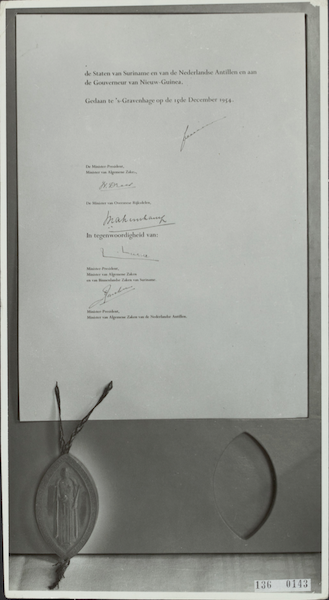 The Promise
The Statute was the fulfilment of a promise made by Queen Wilhelmina in a radio address on 7 December 1942 from London. She spoke of a national union in which the Netherlands, Indonesia, Surinam and Curaçao "will participate together, while each will look after its own internal affairs in independence and relying on its own strength, but with the will to assist one another". Wilhelmina added: "I know that no political unity and alliance can last without the voluntary acceptance and loyalty of the vast majority of the citizenry".

This voluntary acceptance did not apply to Indonesia in the meantime, which was completely separated from the Netherlands after a violent war of independence. The Statute of 1954 had not come about without a struggle. The Second World War had accelerated the pursuit of greater autonomy in Curaçao and Surinam. The western part of the Kingdom of the Netherlands had been the only unoccupied part. After the war, decolonisation processes started worldwide. The Netherlands wanted to keep the overseas territories in a Union. During several round table conferences in Willemstad and Paramaribo the text of the Statute was negotiated, which was accepted in the course of 1954. A number of Surinamese activists and organisations living in the Netherlands, including the Ons Suriname association and Wie Eegie Sani, published a manifesto against the draft Statute. But it came. 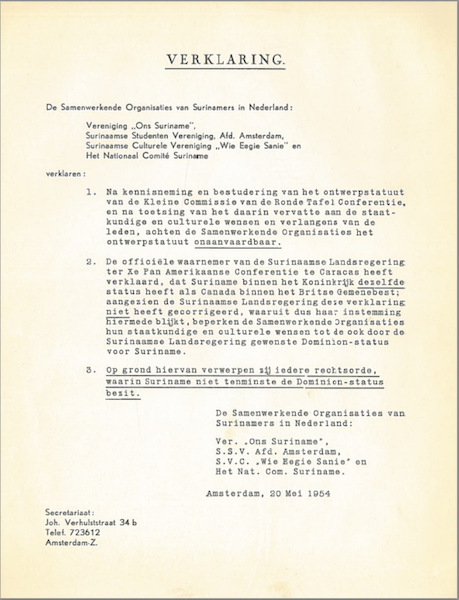 Status separate
Since then, much has changed. In 1986, Aruba was granted 'separate status', its own position within the Kingdom. In 2010, the Netherlands Antilles was abolished and Curaçao and Sint Maarten became independent countries within the Kingdom. The Kingdom currently consists of four countries: The Netherlands, Aruba, Curaçao and Sint Maarten. The Caribbean part of the Kingdom also comprises three 'special municipalities': Bonaire, Sint Eustatius and Saba. King Willem-Alexander is the head of state of the entire Kingdom. The Statute remains in force despite these changes. Since 1954, 15 December has been Kingdom Day. Kingdom buildings are flown, but it is not an official holiday. In 2008, Naturalisation Day (on which new Dutch citizens receive their citizenship) was moved to 15 December.

Love
"The love for the Kingdom as a whole, the sum of its constituent four countries, (is) not self-evident at the present juncture, not here (in Curaçao), not in Aruba and Sint Maarten, not in Bonaire, St Eustatius and Saba and certainly not in the European Netherlands either", said Vice-President of the Council of State of the Kingdom, Thom de Graaf in a speech on the eve of the 65th anniversary of the Charter. De Graaf noted that from the mid-sixties to the end of the eighties, the idea was certainly prevalent in the Netherlands that independence under international law would form the obvious final element in the process of decolonisation. That the perspective of independence had disappeared on Aruba and on the other islands. Also in The Hague, people realised that the ties with the islands would not be severed. However, the relationship remains fraught with tension.