Since June, the Golden Coach has stood inviolable in a coach house made of thick glass in the large courtyard of the Amsterdam Museum. In a beautiful column in the newspaper Het Parool, Maarten Moll described how the coach stood there 'naked and alone' under that glass bell jar, handicapped because the horses were missing. Moll compared the sculpture with the glass cage in Russian and Italian courtrooms in which suspects are locked up. Sarah van Sonsbeeck's work of art in the other courtyard - Pedestal for the imperfect - forms in many ways a counterpart to the coach in its glass cage. Sarah is one of the artists who has been asked to make a work that reflects on the Golden Coach. 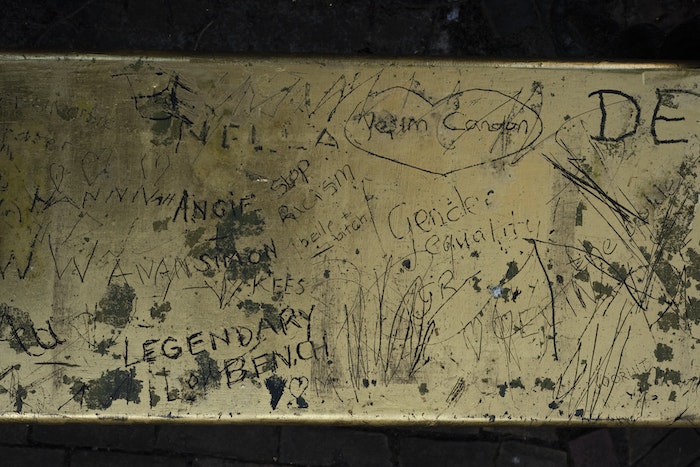 You could see the Golden Coach as a 'golden pedestal' for the monarchy. Not only symbolically is it a pedestal - gold is often associated with wealth, power and purity - but also literally it places the monarch riding in it just a little higher than the people around him. When Sarah heard that the tree in the Boys' Courtyard is a Wilhelmina tree, planted in 1898, she suggested that the bench around it be covered in gold leaf. One of her considerations was that the tree is a 'living' and changing monument, because it keeps growing, while the Golden Coach has just been 'restored'. Such a restoration is an attempt to make the object appear unchanging, as if time has no hold over it, while the way we think about it is in fact subject to change. She was also visually intrigued by the bench, which functions as a small pedestal, an elevation of the square. This visual pedestal acts as a frame, and at the same time as a protection for the tree. 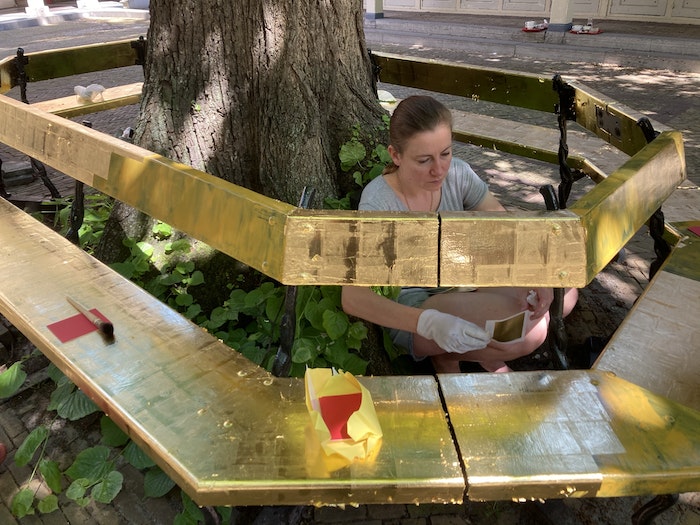 A crown princess's allowance in gold leaf Sarah van Sonsbeeck has been working with gold for years. Out of curiosity she studied the question how the gold leaf on the golden coach relates in 'gold value' to the allowance of the royal family. As an example, she took the allowance of Crown Princess Amalia (1,460,000 euros per year). Generally speaking, 1 kg of gold can be used to make approximately 500 m2 of gold leaf. On 29 September 2020, one kilogram of gold cost approximately 51,506 euros. Amalia's allowance would then be 28,35 kg of gold per year, of which you could theoretically make 14.173,- m2 of gold leaf. This does not include the substantial production and processing costs. That number of square metres is (according to google maps) more than 4.4 times the surface area of the entire Amsterdam Museum, including the courtyards. With one annual grant, the entire museum, including all floors and courtyards, could therefore be covered in gold leaf. The gold leaf on the golden coach is almost negligible compared to this amount, it cannot be more than 50m2. Based on this calculation, Van Sonsbeeck concludes that the significance of a 'golden pedestal' and the money spent in history to make and restore it are actually much more controversial than the amount of gold on the coach. 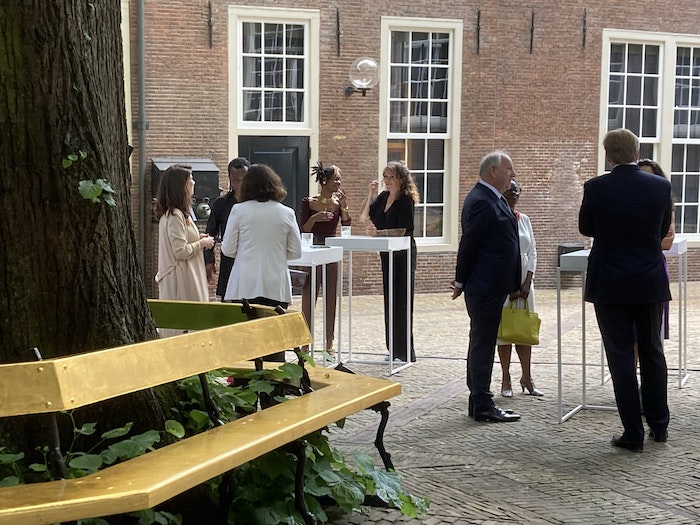 Legendary Bench The bench began as a beautiful shiny object at the opening of the exhibition, but immediately, at the invitation of the artist, messages and names were left in it. Culture councillor Touria Meliani was the first to scratch her name into the work. Over the months, the bench became increasingly full. Someone scratched 'Legendary bench' into it. There are many hearts with names, remarkably often with two men's or two women's names, a question 'Where is my gold?', a song by Ramses Shaffy and even a marriage proposal. The tree has been carefully photographed by our museum photographer, almost like the scene of a crime. In the coming period, together with the artist, we will decide what will happen to the (wood of the) bench in the future. 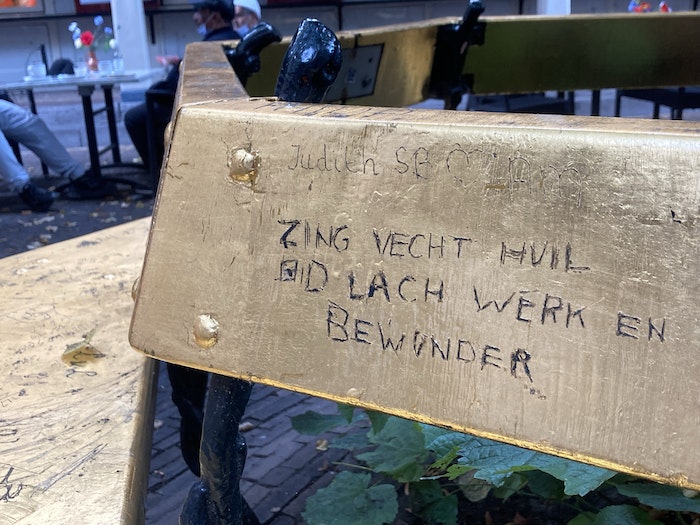