On Friday, June 18, the exhibition The Golden Coach opens at the Amsterdam Museum. After more than five years of restoration, the Golden Coach is back on public display for the first time. The carriage will be on loan to the Amsterdam Museum until February 2022. This means that the carriage is temporarily returning to the city that gave it to Queen Wilhelmina in 1898, Amsterdam.


The Golden Coach will be displayed in a glass enclosure in the large courtyard of the Amsterdam Museum. Visitors will be able to view the restored carriage up close in peace and quiet. In six galleries around the courtyard, with a view of the Golden Coach, various stories are highlighted. Hundreds of cultural-historical objects, paintings, Orangery, garments, cartoons, photographs and moving images give a multifaceted picture of the history and use of the Golden Coach and the past and present discussions about this iconic vehicle. 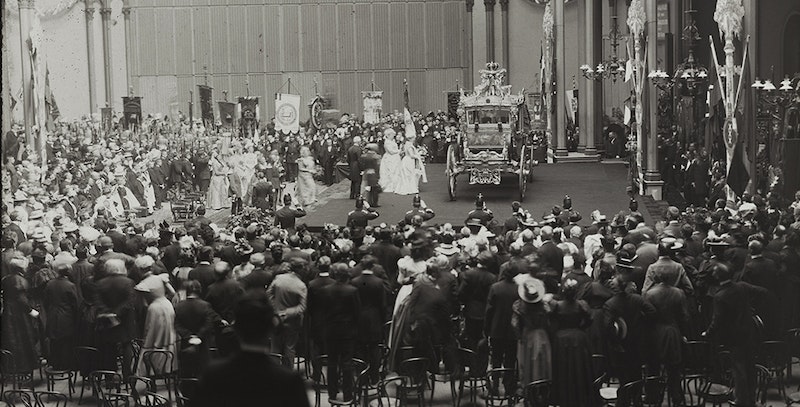 The Golden Coach was conceived as a gift for the inauguration of the first woman on the Dutch throne, the then eighteen-year-old Queen Wilhelmina. Ever since its inception, the carriage has known fans and critics. The Golden Coach is therefore much more than just a vehicle. The carriage symbolizes something greater: the House of Orange, democracy, the self-confident capital of Amsterdam, the fairy tale (or: golden cage) of royal existence, the Kingdom of the Netherlands, the colonial past. All of these meanings are addressed in the exhibition, which is therefore designed in multiple voices.

The Golden Coach is the subject of a current debate, caused by the painting on the left side of the vehicle: Tribute from the Colonies. Depicted are people from the colonies paying tribute to a white youthful woman symbolizing the Netherlands. An increasing number of people are finding this depiction of colonialism inappropriate for national celebrations.
Should the carriage continue to be used on Prinsjesdag and during Orange weddings and inaugurations? Does the carriage deserve to be adapted, or does it belong in a museum? The exhibition highlights diverse perspectives on this controversial driving heritage. The Amsterdam Museum also invites visitors to share their views and use augmented reality to create an alternative Golden Coach.

Artists and the Golden Coach

To achieve a polyphonic and contemporary view, artists from different generations with various cultural backgrounds were commissioned to create artworks in which they reflect on the rituals that encompass the coach, the materiality and craftsmanship of the vehicle, and the colonial past and its impact on the present. These artists’ installations, sculptures, paintings, photography, sound art, and performances offer artistic and critical perspectives on the Golden Coach. Participating artists are: AiRich, Arahmaiani, Berend Strik, Bernard Akoi-Jackson, Brian Elstak, Danielle Hoogendoorn, Erwin Olaf, Iswanto Hartono, Naomie Pieter, Nelson Carrilho, Painted Series, Raul Balai, Sarah van Sonsbeeck, Serana Angelista, Sharelly Emanuelson and Sithabile Mlotshwa.
For more information about the participating artists and their work, click here.

In the context of the exhibition we organise a diverse public program. In lively, critical and playful events we stimulate conversations on what we (do not) see when we look at the Golden Coach.
For public program, click here.
During the preparations for the exhibition, every two weeks a broadcast of the online talk show AM LIVE was devoted to its creation. Curators and members of the sounding board group shared their thoughts and insights and discussed dilemmas.

The withcoming publication The Golden Coach (WBOOKS, 2021) is published in Dutch and English.
This richly illustrated book tells significant and surprising stories about the Golden Coach in an accessible way. Renowned authors and young talents produced new research on the meticulous restoration, the ceremonial aspects, and the different meanings of the Golden Coach, including the highly contentious panel, Tribute from the Colonies. Showpiece, national icon, symbol of colonialism: the royal carriage is examined from every angle. With essays from a.o. Annemarie de Wildt, Margriet Schavemaker and Karwan Fatah-Black.
To the publication

Listen to the Audiotour